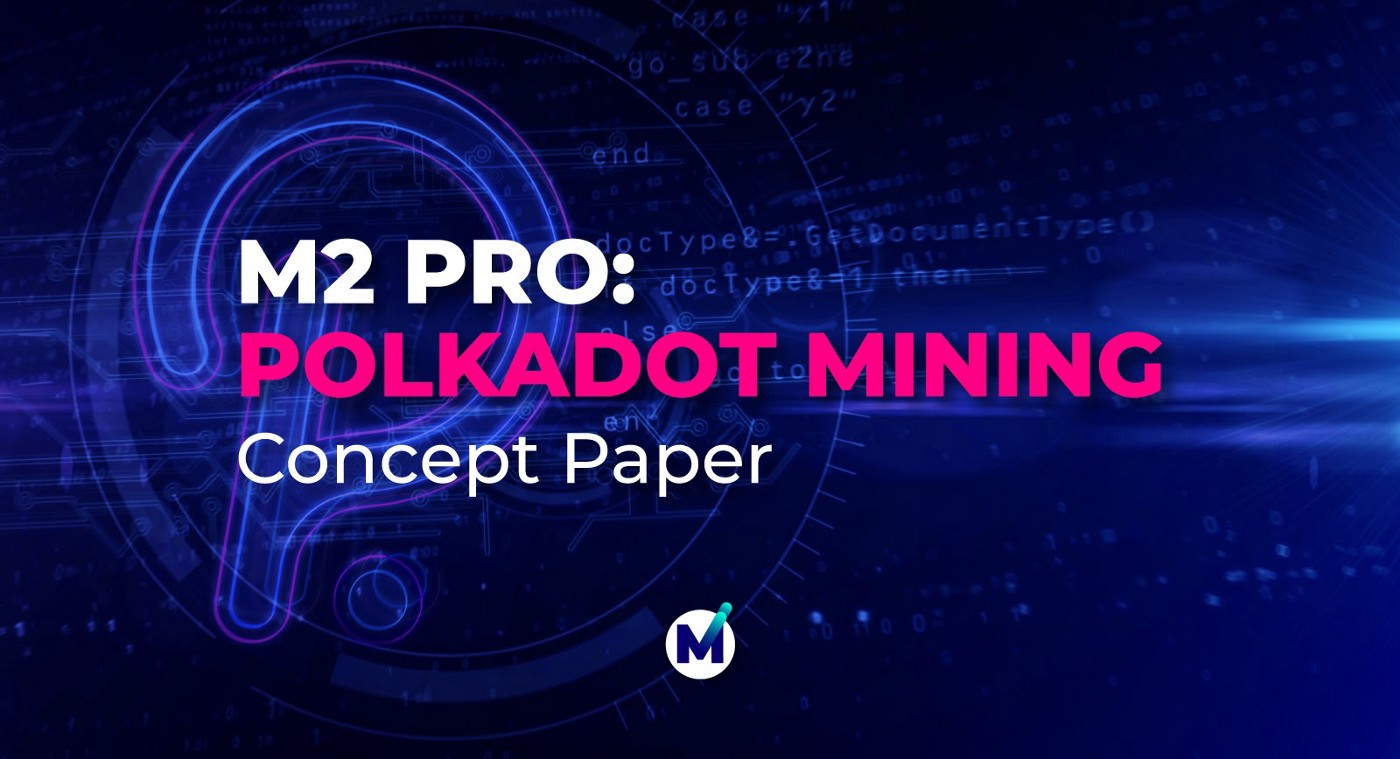 In just a short period, the Polkadot token has rocketed to the top of the Crypto charts. Polkadot’s protocol connects multiple blockchains, which is an essential aspect for many individual chains. The Polkadot process adds value and data to previously incompatible networks, like Bitcoin, Solana and MXC.

The MXC Foundation has been working with Polakdot to deliver the parachain of the future, which will assist, grow and onboard multiple data chains and the data they manage. In 2022, the M2 Pro is looking to add its fourth (4th) token to its Multi-Token Network. The Polkadot token is designed to be fast and scalable, and we’re delighted to present this mining concept paper. We will discuss the onboarding possibilities Polkadot may bring to the M2 Pro and the multi-token mining network.

Before we dive into how mining Polkadot tokens (DOT) can be made possible with M2 Pro, it’s imperative to note that the full extent of the Polkadot token supply has already been assigned and/or distributed, meaning there is no supply of DOT that can be mined in the traditional sense, the same way Bitcoin or Ethereum (before Ethereum 2.0) are mined through Proof of Work (PoW) mechanism.

Polkadot operates on a Nominated Proof of Stake model, or NPOS. The DOT NPOS model relies on two elements: nominators and validators. Nominators are DOT token holders who decide to nominate a specific validator (or multiple validators, should they wish) by staking their DOT tokens on the validator. The validators essentially monitor the Polkadot blockchain, ensuring that the blockchain operates appropriately. However, not all validators are monitoring at the same time. To put it simply, validators draw a random number lottery that determines which validator gets to monitor the specific block.

Since the MXC Foundation already operates its own, successful validator on Polkadot, our development team is investigating extending an arm from the current validator to include the M2 Pro miner network, allowing them to mine DOT. Here’s the current process our technicians have identified:

To allow for M2 Pro to “mine” DOT, there are some additional steps that may need to replace step 7. This is part of the concept phase:

8. A portion of MXC token on the miner side enters a collateralisation phase, while the rest is on the M2 Pro Miner network (as per usual with MXC, DHX, or BTC)

9. During the collateralisation phase, MXC is put into a multi-faceted arbitrage that longs MXC while maximising the DOT gained. This arbitrage model is unique, since it does not rely on one central pair, but instead relies on multiple pairs at the same time (more on this below)

10. With DOT gained through the collateralisation phase, the DOT could enter the MXC Validator on Polkadot as DOT stake

11. The DOT that is extrapolated per era (Polkadot’s usage of term to determine cycle, in which 1 era is roughly 1 day) is automatically claimed by the MXC Validator (usually people need to claim for themselves, and if they forget to do that then their rewards expire in 84 era)

12. The claimed DOT could then be added to the M2 Pro Miner network as part of this concept

Uniqueness of the multi-faceted arbitrage model

A more complex traditional arbitrage relies on one type of pair. Let’s say there’s one MXC-USDT pair and another MXC-stablecoin pair such as MXC-USDC. MXC could be priced at $0.031 USDT per token, while being priced at $0.028 USDC per token. This creates another arbitrage opportunity.

Either way, arbitrages do not aim to hold the specific token. Their main purpose is to identify big enough opportunities to initiate a flash swap, allowing them to have more stablecoin at the end of the day, to minimise the volatility of their gains. This means that most arbitrages short on a token. In the case of MXC, the arbitrager would have released all MXC tokens during the process, and would have shorted MXC.

This allows the arbitrage to be completed while it longs on MXC, therefore keeping the price of MXC on an extended upward slope curve, while maximizing the quantity of another secondary token held, which, in this case, is DOT.

The multiple pair essentially puts MXC as a collateral and uses the arbitrage process itself to act as real leverage to obtain more DOT, and, at the same time, to support the price of MXC.

This, in theory, would allow M2 Pro holders’ MXC to be translated into DOT, which can then be used and staked in the validator node and account for the commission rate, while ensuring that the miners can successfully add DOT to the M2 Pro Mining network.

This is a discovery concept paper analysing the validity of DOT mining and adding DOT to the M2 Pro Mining Network. This paper has been presented in order to increase discussion and further concepts to ensure a multitude of tokens (including Polkadot) can be continually added to the M2 Pro Multi-Token Miner. This concept paper does not guarantee nor does it assure any accuracy. This is purely a concept phase, and should be seen as a work in progress concept paper and not a guarantee on any of the aforementioned aspects of this mining process.